- June 22, 2022
June 22, 1958 fell on a Sunday. On this day, June 22, 1958, Martha Ella Boisseau, master tailor and seamstress struggled to present Billy Mitchell Boisseau master drummer a plump baby girl in the midst of tornado weather. No wonder life was been a struggle for this child. They named their daughter Michelle Rhnea Boisseau. She was the first of four children born to the young couple. Michelle Rhnea was later to become wife of 21 years and divorced by choice, owner and founder of The Think Tank for the Children of Zion and later, The Israel Academy, the mother of 5 productive children, English Professor for the City Colleges of Chicago, Director of Curriculum &amp; Professional Development for schools serving at risk youth, advocate for preventive health care and champion for taking a more proactive approach to health and wellness, writer and author of The Purple Rose and She Speaks Psalms, community and church organizer, servant of The Most High, and friend of many who know her. Mak
Post a Comment
Read more

I feel like singing! I need you, Lord, I'm crying and praying, desiring to be in a position to make my calling and election as I wait for you to come! When you come Lord, come by here! A song by The Natural Branches says, "Let my record show that I did my best and I fought a good fight" if it's my time to go. Have mercy on me Oh God. Psalm 71  1  In thee, O Lord, do I put my trust: let me never be put to confusion. 2  Deliver me in thy righteousness, and cause me to escape: incline thine ear unto me, and save me. 3  Be thou my strong habitation, whereunto I may continually resort: thou hast given commandment to save me; for thou art my rock and my fortress. 4  Deliver me, O my God, out of the hand of the wicked, out of the hand of the unrighteous and cruel man. 5  For thou art my hope, O Lord God: thou art my trust from my youth. 6  By thee have I been holden up from the womb: thou art he that took me out of my mother's bowels: my praise shall be continually
Post a Comment
Read more 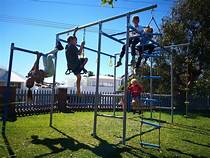 In Each Moment by Michelle Rhnea Yisrael In Each Moment: An African-American Anthology of Short Stories  About Life & Love           Get ready to go on a journey through the many phases and stages of love; you will not be disappointed. In Each Moment is an evocative narrative anthology of African-American short stories and poems anthology of short stories and poems giving voice to those who can't raise theirs and recommended for secondary and post-secondary classrooms, women's book clubs, and Women’s Studies courses, women's support groups. It is packed with literary devices great for scholarship.           The stories depict the struggles, hurts, joys, and triumphs of women longing for the one thing that would make them feel whole and fulfilled love. The main characters experience a myriad of emotions from immense joy to unchartered struggles, to sheer trauma and pain, they are characters you can feel. You will experience simple pleasure and deep connections. You wil
Post a Comment
Read more

It is important for children to play, early. In light of the growing disunity and violence raging with the minds of the nation's adolescent youth, researchers are investigating various methods for dealing with the problem. However, those who are experienced in teaching our youngsters conflict resolutions and behavior management, have discovered that good old-fashioned play is a viable use to combat disruptive behavior. Unfortunately, children are often left in swings and baby seats, left in front of the television watching videos, or left to play on an iPad and Tablets void human conversation, eye contact, and old-fashioned play.  It started with Sesame Street parenting and has escalated out of control. Play as a therapeutic tool, through project-based learning, is one of the central components of our professional development program, which modifies behavior in disruptive youngsters. Play is as vital as love, good nutrition, care, and hope. It is very important in the learning and
Post a Comment
Read more

No, Not in the church! 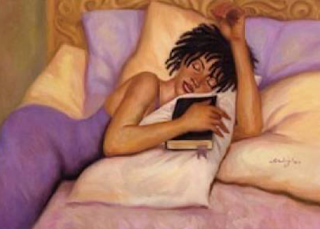 Marriage and Divorce The way I am addressing this topic is one of controversy in the church.  Moses allowed divorce because of the hardness of men's hearts.  You ever lived with a hard-hearted man, I am here to tell you that it "t'an't nothin" nice.  "In the beginning, it wasn't so", but neither was polygamy, meat-eating, and a whole lot of other things.  The Lord said he hated divorce, and most of us do too, but he didn't say it didn't need to happen nor did he say it won’t going to happen.  Well, guess what?   "Shit happens!", It's life in this crazy, mad, evil world.  Sometimes bad things, things that are taboo, unspeakable things;  they do happen and very often we become better when it happens.  Yes, if each of us performed our duties in the manner in which the scripture dictates there would be no need for living with the pain of abuse nor would there be a need for divorce. It is often about intimacy, being admired, smil
2 comments
Read more

Ten Quick Tips to Show Love to Others 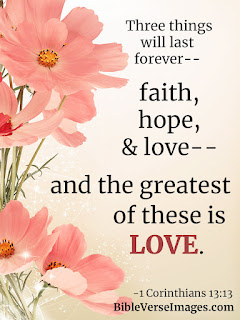 Meditate on 1 Corinthians 13:13 and let God fill you with His love so you can share the love with others.  Encourage your loved ones, give them a hug, and tell them you know they can do whatever they put their minds to do, and reassure them you will help.  Love on the people closest to you. Pray for others. Give your heart in prayer and intercession for others. Stand in the gap for them. Do not stop praying until you see a change. Make someone feel special by paying very close attention to them, listening to them attentively, staying focused, sharing their pain and worries, and encouraging them to stay strong. Share the words of kindness they need. Make them laugh. Give someone who needs it a smile and a hug. This is simple and does not cost you a thing.  Use your voice to edify others. Just be joyful and share it with others. Volunteer your time to help the needy, visit the homeless, the fatherless, the orphan, the elderly, and the widow. Adopt a single-parent family, look around yo
Post a Comment
Read more
More posts